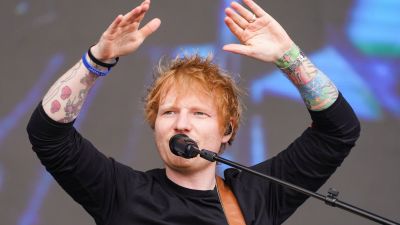 The 31-year-old megastar is the only artist in history to claim both titles in two different years.

Ed has been the most-played artist in the UK for four years, however, in 2020, Dua Lipa interrupted his run by beating him to the title.

Fellow pop superstar Adele, 34, is the only other musician to claim the most-played artist and most-played song of the year in the same year. ‘Hello’ hitmaker Adele was the most-played artist of the year for 2011, with ‘Rolling In The Deep’ nabbing most-played single.

The data, compiled by the Phonographic Performance Limited (PPL), found David Guetta to be the second most-played artist of 2021.

Tom Grennan, 27, has claimed two spots on the most-played singles in the UK for 2021, with his Calvin Harris collaboration ‘By Your Side’ placing second, and ‘Little Bit Of Love’ third.

Meaning David Guetta is the only other artist to have two songs in the top 10.

“His chart-topping success over the last five years is a testament to not only the quality of his output but also the strength of UK music at a time when the global music landscape is more competitive than ever.”