Imagine By John Lenon:More Than Just a Peace Anthem - Nepali E-Chords
X
Back to the top

Imagine By John Lenon:More Than Just a Peace Anthem

Kathmandu- Imagine was first released in the US on 9 September 1971 .The album was recorded across February, June, and July and footage survives of Lennon trying out versions of the song on the piano and singing it in different styles.
John Lennon described the song as “an ad campaign for peace”, and it is no surprise that his moving anthem is such a beacon for those who long for global harmony. “Imagine,” written in March 1971 during the Vietnam War, has become a permanent protest song and a lasting emblem of hope.The song was first inspired by Ono’s poetry in her 1964 book, Grapefruit. In the poem “Cloud Piece” Yoko wrote, “Imagine the clouds dripping, dig a hole in your garden to put them in.” John Lennon later said: “‘Imagine’ should be credited to Lennon/Ono. A lot of it – the lyric and the concept – came from Yoko, but in those days, I was a bit more selfish, a bit more macho, and I sort of omitted her contribution, but it was right out of Grapefruit.
The first line of this love song to humanity – “Imagine there’s no heaven” – was a provocative statement at the time, a direct challenge to organised religion from a man who had previously joked that The Beatles were “more popular than Jesus.” The song continues to challenge the listener, asking them to imagine a world with no possessions, no religion or even countries – nothing, indeed, “to kill or die for.” 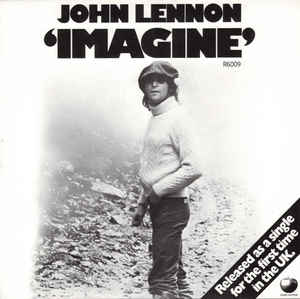 When “Imagine” was released, John Lennon said that the world was too focused on insignificance and “the thing we should be talking about is the violence that goes on in this society.” It reached No. 1 following Lennon’s murder in December 1980 and entered the UK charts again in 2012 after Emeli Sandé recorded a cover for the 2012 London Olympics. Still today, it is played at every New Year’s ceremony in Times Square in New York.
This popular music masterpiece, a model of simplicity, continues to inspire people of all races and creeds, offering the listener a momentary respite of hope in a troubled world, especially in the beautiful lines:
You may say I’m a dreamer
But I’m not the only one
I hope some day you’ll join us
And the world will be as one