MOTHER,FATHER AND DAUGHTER TRIO - Nepali E-Chords
X
Back to the top 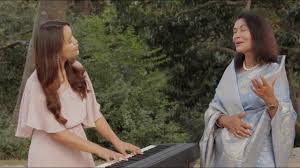 Kathmandu-A recently released song Pokhida Haaso Fulko is sung by Kunti moktan and Subani Moktan. The lyricist of this song is Ratna shamsher thapa and the music director is shila bahadur moktan. This song is a combination of classical and modern instruments as sarangi, tabala along with piano are played.

This is not the first song in which both mother daughter are seen together. Songs like nishturi mayalu, timi binako, geet mero Nepal ho were released in which both of them worked together.

The newly released song has crossed more than 6K views. This song was released on Mother’s Day, what could’ve been the greatest gift for a mother than a daughter carrying her legacy.