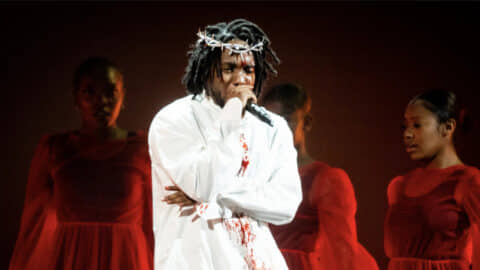 On Sunday night, the hip-hop legend headlined Britain’s famous Glastonbury Festival, performing in a white tunic with a diamond-encrusted crown of thorns on his head – an obvious allusion to Jesus Christ. Blood even started pouring down his head halfway through the set, although it’s not clear whether this was part of the performance or if the crown had actually made him bleed. The crown, which was created by esteemed jewellers Tiffany & Co., made its first appearance on the cover of Kendrick’s fifth studio album, Mr. Morale & the Big Steppers – but fans have been given a closer look at the crown during the rapper’s recent string of European performances, including his surprise medley at Louis Vuitton’s Paris Fashion Week show and headlining performance at Britain’s famous Glastonbury Festival, HipHopDX explains. It’s one hell of a flex – but fans have angrily expressed their outrage at K.Dot imitating Christ like this, especially considering the outrageous price of the crown.

While the crown doesn’t have an official price tag, it’s not hard to speculate how much it would have cost. According to Tiffany, this “true masterpiece” is made from titanium, contains over 8,000 diamonds totalling over 137 carats and was crafted by four artisans over a span of 10 months, with a total of 1,300 hours spent setting the thousands of diamonds alone.

According to the Diamond Price Index, the average price per carat for loose diamonds weighing less than 0.5cts is around US$2,200, and 0.51-0.99cts is around US$3,600 – and that’s not even taking quality into account. Tiffany would have used only high-quality diamonds, so they probably paid close to double that per carat. Then, factor in the man-hours and expertise that went into its creation (titanium is a very challenging material to make jewellery from) as well as its exclusivity and cultural notoriety, and we’re looking at something worth easily over $1 million. Really, it’s a money can’t buy sort of thing.