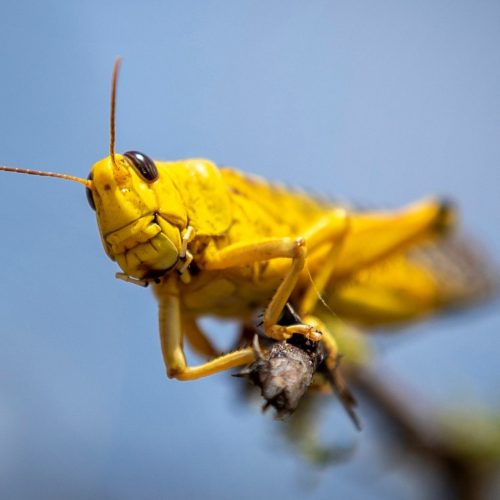 Locusts are a group of certain species of short-horn grasshoppers in the family Acrididae that have a swarming phase. Experts claim that the heavy rain they have recently encountered has given ideal humid conditions for them to breed and form swarms to migrate to other remote areas. Experts further reinforce their argument that global warming has encouraged the breeding of locusts. They explain that insect eggs hatch better in warmer and moister conditions.

The possible entry of locusts in Nepal has drawn the attention of many, including the Agriculture and Livestock Development Ministry. Sahadev Humagain, chief of the Plant Quarantine and Pesticide Management Center, says the locusts are a major danger to any agricultural area as they eat away everything and leave the ground barren. They are violent eaters who survive by eating from others’ crop-fields. An adult desert locust weighing around 2 grams will approximately eat its own weight every day. And they’re totally not picky. A mere 1 square kilometer swarm can consume almost as much food as 35,000 people (or six elephants) can eat in a single day.

They can travel 150 KM per day which makes them impossible to kill them. Agriculture and Livestock Development Minister Ghanshyam Bhusal recently said he has come to learn that a certain form of music can destroy famine causing locusts. What he said is not wrong because Dr. Herbert Talwana, an entomologist at Makerere University College of Agriculture, says that locusts are a group of insects noted for stridulation(the ability to make and detect sounds). “Any noise other than their” music, “which is an essential part of the cycle of courting and mating, will disturb them and therefore flee,” says Talwana.

Farmers in Pakistan battling desert locusts have manufactured a simple automated machine that makes noise to scare off locusts from their gardens. The machine is locally manufactured and is solar-powered. The unit is fitted with a metallic material that can be banged to create high pitched noise, a banging hammer, and a solar panel to power the device. The administration of Panna district in Madhya Pradesh used police vehicle sirens to scare away locusts in the desert. People banged utensils at Rajasthan to scare off the swarm of desert locusts. “It saved the loss of agricultural crops here. Making loud noises or spraying insecticides is the way to prevent them from destroying crops,” the Agriculture Official said.

Minister Ghanashyam Bhusal consulted with a brother living in Australia who suggested that songs and music will be very successful in controlling the famine that causes locusts. And we all know, loud sounds which can be suitable for this process obviously are some heavy stuff we can listen to in Heavy metal music. So basically, heavy metal music can play an important role in pounding off the locusts.