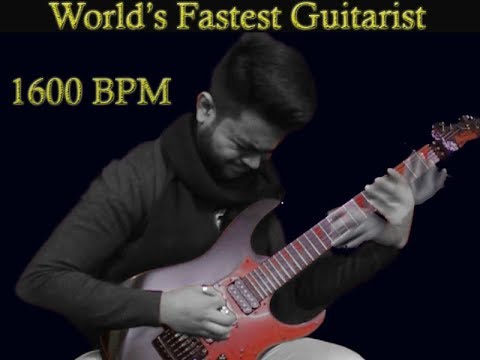 It has been almost three years and Nirvana Bista, aged 18, still holds the title for the fastest guitar player in the world. His name went down in history on May 2nd, 2015 for having played the orchestral interlude: Flight of the Bumbleebee  piece, originally by Rimsky Korsakov , at a mindblowing tempo of 1600 BPM. Nirvana Bista, of Hattigauda, Kathmandu achieved this amazing feat at a very young age. In fact, he was a grade ten student when he set the new record for the World’s Fastest Guitarist,  stealing the title from previous record holder Daniel Himebauch, who had it for 1300 BPM.

The video was taken at his School St.George College Auditorium at Mussoorie, India. At first, many considered the video as fake and fast forwarded but as the saying goes, “truth is rarely pure and never simple”, the registry of official world records in UK soon confirmed Bista’s achievement as a world record.


Nirvana has recently completed his high school and is currently here in Nepal, preparing for his board exams for higher education. He is also taking Jazz guitar classes with the mighty Nepali guitar giant Hari Maharjan . Nepali E-Chords recently had a the opportunity to interview him in our studio at Thapagaun, Kathmandu.

Watch him share his things and slay the guitar at lightning speeds.